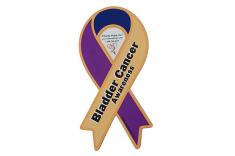 It was Napoleon Bonaparte who said, "A soldier will fight long and hard for a bit of colored ribbon."

Thus it seems only fitting that the modern history of awareness ribbons has its origins with the military when, in 1979, Americas tied thousands of yellow ribbons in anticipation of the release of American hostages in Iran.

As the AIDS epidemic waged its way across the world in the early 1990s, activists adopted the power of the red awareness ribbon as a symbol against that fight. And the pink ribbon, popularized by the Susan G. Komen Breast Cancer Foundation, builds awareness for the 12 percent of women in the United States who will develop breast cancer.

Since that time, dozens of colors of ribbon have been used to represent the many types of cancer.

The Rio Grande Cancer Foundation is pleased to pen a monthly "Colors of Cancer" article to help promote awareness and understanding of the more than 200 different types of cancer that can occur in the human body. During July, the awareness focuses on bladder cancer, the fifth-most common cancer affecting approximately 535,000 across the United States, with a yellow ribbon.

My own yellow ribbon encounter came in 2008 via a phone call from my brother-in-law, Bill Harris. A hydrologic technician with the International Boundary and Water Commission in Del Rio, Texas, Bill rarely missed a day of work and was seldom sick.

On this particular Sunday, however, after telling me about the water levels in Lake Amistad and the raggedy mongrel that had followed him home from the lake, he casually mentioned that he had been noticing blood in his urine.

Blood in the urine, I advised him, was a heavy duty warning sign and one not to be ignored. So, even though he "felt fine," Bill sought medical attention, including laboratory tests and an intravenous pyelogram, where a doctor injects dye into the blood to light up the bladder on an x-ray.

The results of the tests confirmed that Bill had stage four bladder cancer, which had spread to the wall of the abdomen and the pelvis.

With the help of the Rio Grande Cancer Foundation, Bill opted for surgery to remove his bladder and undergo reconstruction of a new bladder with small intestines, a procedure called Ileal neobladder, rather than having a urostomy, an external pouch for urine collection.

The surgical procedure was extensive and the recovery equally challenging, but a year after his initial diagnosis, Bill regrouped, retired and began life anew in Las Cruces with the stray from Lake Amistad, who turned out to be an apricot poodle in disguise.

Bill's battle with bladder cancer ended in January 2010, almost three years to the date of his diagnosis.

I can't help but think that earlier intervention when he first noticed signs might have rendered a different outcome, but bladder cancer is one of those stealth intruders.

This July, I will remember Bill by tying a yellow ribbon 'round the neck of Cooper, also known as "Coup d' Bill," an apricot poodle of dubious origin who rules our household.

Who is susceptible to bladder cancer?