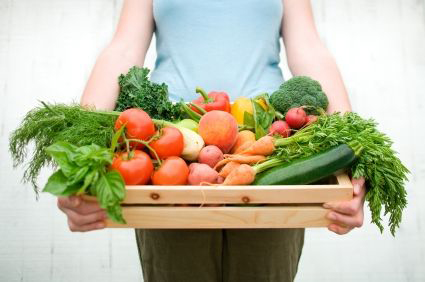 No single food or food component can protect you against cancer by itself. But scientists believe that the combination of foods in a predominantly plant-based diet may reduce your risk of cancer. There is evidence that the minerals, vitamins and phytochemicals in plant foods could interact in ways that boost their individual anti-cancer effects. In addition, vegetables, fruits, whole grains and beans are low in calorie-density and protect against weight gain. Expert reports say that carrying excess body fat is implicated in the development of cancer. Eating a predominantly plant based diet can help prevent weight gain and protect against those cancers whose risk is convincingly increased by higher body fat (cancers of the colorectum, esophagus, endometrium, pancreas, kidney and breast in postmenopausal women). 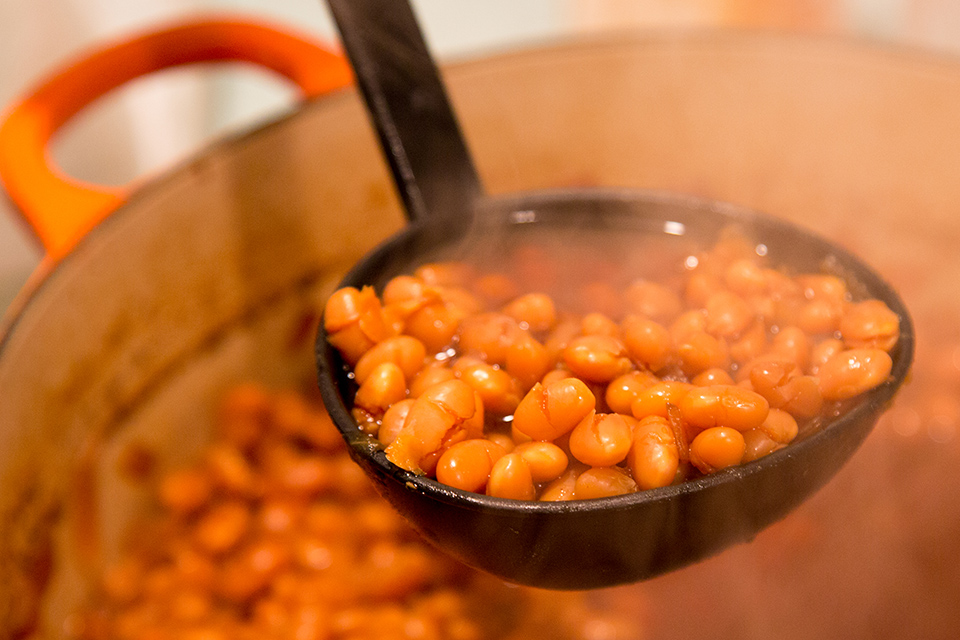 Beans (also known as legumes) include lentils and peas along with many other varieties. Soybeans fall into this category as well. The active ingredients in beans that scientists believe may play a role in cancer prevention include: saponins, protease inhibitors and phytic acid. These compounds, called phytochemicals, are found naturally in plants and appear to protect our cells from damage that can lead to cancer.

Berries are good sources of vitamin C and fiber. Foods high in vitamin C probably protect against cancer of the esophagus, while foods containing dietary fiber probably decrease colorectal cancer risk. All berries, but particularly strawberries and raspberries, are rich in ellagic acid. In laboratory studies, this phytochemical has shown the ability to prevent cancers of the skin, bladder, lung, esophagus and breast. Strawberries also contain a wide range of other phytochemicals, called flavonoids, each of which seems to employ a similar array of anti-cancer strategies. Blueberries contain a family of phenolic compounds called anthocyanosides, which many scientists believe are among the most potent antioxidants yet discovered. 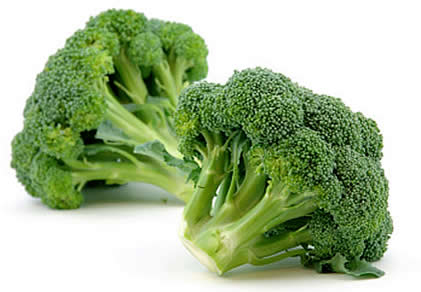 The cruciferous vegetables include broccoli, cauliflower, cabbage, brussels sprouts, bok choy and kale. Non-starchy vegetables, like those listed above, probably protect against some types of cancers. This protective effect is strongest for cancers of the mouth, pharynx, larynx, esophagus, and stomach. Components of these vegetables have shown the ability to stop the growth of cancer cells in various cell, tissue and animal models, including tumors of the breast, endometrium, lung, colon, liver, and cervix.

Spinach, kale, romaine lettuce, leaf lettuce, mustard greens, collard greens, chicory and Swiss chard are excellent sources of fiber, folate and a wide range of carotenoids such as lutein and zeaxanthin, along with saponins and flavonoids. According to a report from the American Institute for Cancer Research, foods containing carotenoids probably protect against cancers of the mouth, pharynx and larynx. Some laboratory research has found that the carotenoids in dark green leafy vegetables can inhibit the growth of certain types of breast cancer cells, skin cancer cells, lung cancer and stomach cancer.The Report also noted probable evidence that foods containing folate decrease risk of pancreatic cancer and that foods containing dietary fiber probably reduce one’s chances of developing colorectal cancer. 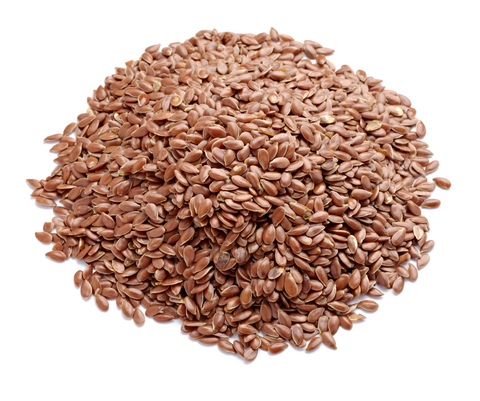 Flaxseed is available as flaxseed flour, flaxseed meal (which has the texture of cornmeal), flaxseed oil and whole flaxseeds. The whole seeds are not digested well, so they provide little nutritional or health benefits unless they are ground. Flaxseed is the best dietary source for substances called lignans. Lignans are classified as phytoestrogens (plant estrogens) because they seem to mimic the action of estrogen in the body. Note that flaxseed oil does not naturally contain lignans, although some manufacturers add them during processing.

Flax is also the richest plant source of one kind of omega-3 fatty acid, alpha-linolenic acid (ALA). In some studies, this fat has shown promising health benefits, including offering potential protection from heart disease and some cancers.

Note: If you are on medications, talk with your doctor before taking flaxseed. Flaxseed may slow or decrease absorption of medications and interact with certain medications, including fish oil, EPA +DHA supplements and anticoagulant medications such as aspirin or other blood thinners.

Garlic belongs to the family of vegetables called Allium, which also includes onions, scallions, leeks and chives. Foods belonging to the allium family of vegetables probably protect against stomach cancer. Moreover, the evidence in the report shows that garlic, in particular, probably decreases one’s chances of developing colorectal cancer.

In laboratory studies, components of garlic have shown the ability to slow or stop the growth of tumors in prostate, bladder, colon and stomach tissue. Laboratory research has also shown that one garlic component, called diallyl disulfide, exerts potent preventive effects against cancers of the skin, colon and lung. Recently, this compound proved able to kill leukemia cells in the laboratory. In animal studies, components in Allium vegetables have slowed the development of cancer in several stages and at various body sites: stomach, breast, esophagus, colon and lung.

Both grapes and grape juice are rich sources of resveratrol, a type of natural phytochemical that belongs to a much larger group of phytochemicals called polyphenols.

The skin of the grape contains the most resveratrol, and red and purple grapes contain significantly more resveratrol than green grapes. Grape jam and raisins contain much smaller amounts of this phytochemical. Red wine also contains resveratrol. However, with AICR’s second expert report noting convincing evidence that alcohol is associated with increased risk for cancers of the mouth, pharynx and larynx, esophagus, breast (pre- and postmenopausal) and colon and rectum (in men), wine is not a recommended source of resveratrol. Other laboratory research points to resveratrol’s ability to slow the growth of cancer cells and inhibit the formation of tumors in lymph, liver, stomach and breast cells. Resveratrol has also triggered the death of leukemic and colon cancer tumors. In one series of studies, resveratrol blocked the development of skin, breast and leukemia cancers at all three stages of the disease (initiation, promotion and progression).

Since ancient times, tea has been used as both beverage and medicine. Both black and green teas contain numerous active ingredients, including polyphenols and flavonoids, which are potent antioxidants.

One class of flavonoids called catechins has recently become the focus of widespread study for their anti-cancer potential. Tea is the best source of catechins in the human diet, and green tea contains about three times the quantity of catechins found in black tea. In laboratory studies, green tea has been shown to slow or completely prevent cancer development in colon, liver, breast and prostate cells. Other studies involving green tea have shown similar protective effects in tissues of the lung, skin and digestive tract.Studies that track the diets of human subjects over several years (particularly studies conducted in Asia, where green tea consumption is common) have also associated regular usage of green tea with lower risk for bladder, colon, stomach, pancreatic and esophageal cancers.

Note: Very high amounts of green tea components (usually associated with overdosage of green tea supplements) have been shown to interact with drugs that affect blood clotting such as aspirin and change the way the body metabolizes certain medications. 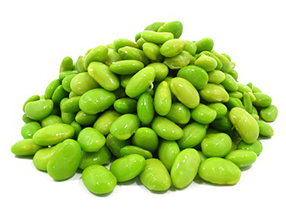 Soybeans are a type of legume, or bean. Foods made from soybeans include tofu, soymilk, soybeans, soynuts, miso (soy paste), tempeh, soy burgers and soynut butter.

Soy appears to contain some components that resemble very weak forms of the body’s natural hormones. As a result, soy foods can mimic the actions of hormones under certain conditions and counteract these hormonal actions at other times. Because of such complexities, most of the studies that have investigated soy’s role in cancer development have dealt with hormone-related cancers such as those of the breast and prostate. Several human and laboratory studies suggest that consuming soy early in life (such as adolescence) may help protect against breast cancer later in life. Results are less encouraging when soy is consumed later in life.

Current research shows that it is safe to eat moderate amounts of soy foods (e.g., soymilk, tofu), up to two to three servings per day.As a precaution, women receiving anti-estrogen treatments such as tamoxifen, should minimize soy foods and avoid isoflavone supplements.

The tomato’s red hue comes chiefly from a phytochemical called lycopene. Tomatoes have attracted particular attention from prostate cancer researchers because lycopene and its related compounds tend to concentrate in tissues of the prostate.

AICR's second expert report, found substantial and convincing evidence that foods containing lycopene probably protect against prostate cancer.Moreover, there is evidence that this cancer-fighting potential is increased if tomatoes are consumed in a processed form that allows these natural compounds to be released and more easily absorbed, such as tomato sauce, tomato paste or tomato juice.

Lycopene, a powerful antioxidant, together with a group of related compounds collectively called the “red family,” has displayed anti-cancer potential in a variety of laboratory studies. In the laboratory, tomato components have stopped the proliferation of several other cancer cell types, including breast, lung, and endometrial.

The term “whole grain” means that all three parts of the grain kernel (germ, bran and endosperm) are included. Refined grains usually have the bran and germ removed, leaving only the starchy endosperm. Brown rice is a whole grain, white rice is not. Other whole-grain foods include wheat breads, rolls, pasta and cereals; whole grain oat cereals such as oatmeal, popcorn, wild rice, tortilla and tortilla chips, corn, kasha (roasted buckwheat) and tabouleh (bulgur wheat). Whole grains are rich in fiber, vitamins, minerals and hundreds of natural plant compounds, called phytochemicals, which protect cells from the types of damage that may lead to cancer. In addition research points to specific substances in whole grains that have been linked to lower cancer risk, including antioxidants, phenols, lignans (which is a kind of phytoestrogen) and saponins. AICR's second expert report, found probable evidence that foods containing dietary fiber, like whole grains, can decrease one’s risk of developing colorectal cancer.

From the American Institute for Cancer Research web-site. To learn more visit www.aicr.org